Here we finish up our 3 part series of reviews on movies with feels with the movie that had me all-out bawling. Like, not a little sniffle. We’re talking full on ugly cry here.

I’m glad I was in the back of the theater.

Lol, brace yourselves – welcome to my review of The Shack! 😀

“A grieving man receives a mysterious, personal invitation to meet with God at a place called “The Shack.””

Sam Worthington (Mackenzie Phillips) – I really like this actor, and I absolutely love this character. He’s more human and relatable than a lot of characters I run across. He had a bad childhood, just full of misery, and then this happens with Missy. Seriously, the actor did an amazing job – seeing him lose it over Missy, with this gut-wrenching cry, was absolutely heartbreaking. Over the course of the movie, he slowly starts to heal. Forgiving in ways I don’t know if I’m capable of myself.

Radha Mitchell (Nan Phillips) – Mac’s wife. She’s barely keeping it together, but she keeps going for the sake of her family. No matter how much Mac cuts himself off from his family, she refuses to give up on him. She’s one tough lady, and I love her.

Megan Charpentier (Kate Phillips) – Man, I feel so bad for this kid. She completely blames herself for what happens to Missy. It’s not her fault, not in any way, but I can see how she could convince herself that it is. I seriously just want to hug her.

Gage Munroe (Josh Phillips) – I feel bad for him, and want to hug him too. His way of dealing with things is a little different than Kate’s, but still not a good thing.

Amelie Eve (Missy Phillips) – *ugh* Hugs all around! I don’t know what else to say about this character, except that she was completely adorable and I felt a burning hatred for the person who hurt her. What happens is disgusting, and a large part of me is helpless to deny my desire for great violence on her behalf. Like, Saw level violence. As I’ve probably mentioned before, I am not a forgiving sort when it comes to certain topics.

Tim McGraw (Willie) – I’ve never seen Tim McGraw in a movie before, but he really did a good job. He’s a close personal friend of Mac and his family, and also narrates the story.

Octavia Spencer (Papa) – This representation of God reminded me a lot of how Morgan Freeman played Him in Bruce Almighty and Evan Almighty. Still all-powerful and all-knowing, but patient like a parent just talking honestly with one of Her children. Lol, I use Him and Her interchangeably here because the movie shows God as both male and female.

Avraham Aviv Alush (Jesus) – This is a more casual representation of Jesus than I normally see, and I love it. He was friendly and had a sense of humor. Mac even makes the comment that he’s more comfortable with Jesus than with the other two.

Sumire Matsubara (Sarayu) – I’ve never seen a representation of the holy spirit before, but I like how they wrote her. She was easy-going and kind of mysterious.

Oh man, where do I even start? My emotions were a little raw because this was the last one of the crying movies I watched last weekend, but I know for a fact I would’ve been crying my face off regardless during several scenes.

I know there’s a little controversy around this movie and the book it was based on, but I’ll try and keep my bias to myself for the most part, or at least be respectful about giving my opinion. Please take whatever I say with a grain of salt. These are just my opinions and thoughts on the content of the movie, and what it made me think about in terms of my own faith.

Lol, I have been told I don’t Christian right, so you can probably guess which side of the controversy my opinion falls on. 🙂

When the movie starts out, you get a glimpse of the rough childhood Mac had. They show that he’s got some serious pain buried inside him, and possibly some guilt over what he felt like he had to do to survive. I won’t ruin it, but he goes through some seriously messed up things.

Then they show you Mac grown up, and with a family of his own. They’re happy, and it’s clear he made sure they’d never feel the way he did growing up. His family is Christian, and his wife refers to God as Papa. He’s more distant from God because of his past experiences, but supportive of his family believing.

*ugh* And then the crying and chocolate cake part of this all comes into play.

You see how Missy is abducted, and Mac distancing himself from his family because of his guilt. He blames himself, and he’s slowly being crushed under the misery.

When he gets a letter from “Papa,” inviting him to the shack – the place where Missy’s dress was found – he thinks it’s some sick joke, or the serial killer tormenting him for some unknown reason.

From the moment he gets to the shack, meeting Papa, Jesus, and Sarayu, he goes through a lot of emotions – above all, anger. He hates Papa for what happened to Missy, and demands answers. He asks a lot of questions I’ve asked myself.

The answers he gets aren’t perfect, but every interaction he has with Papa, Jesus, and Sarayu gives him more to think about, and different ways to see things.

He confronts the events of his past, what happened with Missy, how his family is struggling after her death, and the guilt and rage he feels. 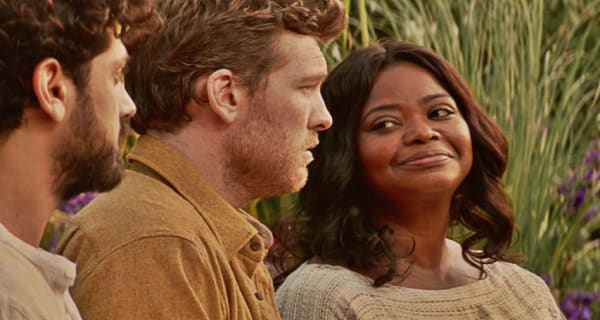 One of the things I appreciated about this movie, which others did not, is that they humanize the trinity – Papa, Jesus, and Sarayu. They tried to make them relatable, and showed a different way of getting close to God. They gave them human form, and had them doing everyday mundane things – like making dinner, gardening, or carpentry. They joked with each other and with Mac, and other times they cried.

There’s even a part where Jesus says something along the lines of “I’m not exactly the religious type.” And another part where he says “I’m human.”

For me, this was meaningful because it’s closer to how I practice my own faith. Lol, I’ve heard some of the complaints about this, but I can relate to Mac in these scenes, and the way he starts to think about God.

Lol, but then it got harder for me to relate.

There is a part in the movie where Papa talks about the trouble with judgement, and how Mac needs to learn to forgive in order to heal. Not just forgive himself, but specifically forgive the man who abducted Missy.

I’m all about forgiving, and trying not to judge, but I’m not going to bother lying – I have a slight wrath problem.

Perhaps “slight” is an understatement.

It generally takes a lot to make me truly angry. I get annoyed now and then, but real anger takes a while for me. And there are only a small handful of topics which can bring out the extremely rare full on rage in me. One of them is child abuse and/or molestation.

I read a movie review years and years ago where the reviewer said something along the lines of “there’s nothing wrong with a child molester that the flat end of a shovel and a vat of DNA-splicing acid can’t fix.”

Yep. You had me at DNA-splicing acid.

I love what the movie is trying to show here, but I’m all for fiery justice raining down upon the heads of the deserving.

However, that being said – watching Mac heal and learn to forgive is one of the most inspiring things about this movie I think. Forgiveness on such a massive scale would feel impossible to me, but over time he embraces it.

From the end of his walk in the woods with Papa, to where he’s in the garden with the trinity, is where I cried the most. Those were the most beautiful moments of the whole thing – where Mac really lets go of everything.

My rating for The Shack: Epic – I absolutely love this movie because it made me think, and it approached the subject of faith and God from a perspective that I understand and can relate to. I will absolutely be buying the book too. 🙂 Definitely check this one out if you like movies like God’s Not Dead and Fireproof, or Christian books and movies in general. 😀

4 thoughts on “Movie Review: The Shack”